Karen Bulow learned to weave textiles from her mother in her native Denmark. In 1929, at the age of 30, she moved to Montreal with her loom and began a remarkable career in handicrafts. She was eventually named the “No. 1 Weaver in Canada” and her innovative eponymous company enjoyed decades of success.

When she first arrived in Montreal, Bulow worked for the Canadian Handicraft Guild, teaching in their educational programs, while also creating her own made-to-order, hand-woven fabrics out of a rented office in downtown Montreal. In the 1930s she founded a business that by 1940 was officially named Canadian Homespuns, through which she sold draperies and upholstery fabrics for the interior design market.

As her business grew, Bulow sought to spread knowledge of weaving techniques via educational initiatives, which in turn allowed her to further expand her production capacity.

In 1946, she began offering a two-month weaving course out of her studio on Union Avenue, instructing students in the creation of tweeds, rugs, upholstery, and draperies. Many returning World War II veterans enrolled in the program under a government initiative that used handicraft training for rehabilitation and reintegration, providing both therapeutic practice and practical training.

The course was also mandatory training for employees of her studio, who worked both on- and off-site. While Bulow employed some weavers in her downtown studio, many others worked for her via the cottage system, weaving patterns to her specifications on their home looms in rural areas of Quebec. This was seen as a modernized version of old European methods of working. The training course ensured that Bulow’s designs were produced according to a high standard of quality.

Though Bulow’s interest always lay primarily with upholstery and drapery, the 1940s saw her studio produce large numbers of accessories, most notably ties and scarves, for the retail market.

In 1951, Bulow referred to the 100% hand-woven wool ties, a market she had entered almost by accident, as “the bread and butter line” of her business. Offered in department stores and boutiques across Canada, the ties came in a variety of patterns, ranging in price from $1–$2 in the 1950s. The accessories line also encompassed caps, mittens, and scarves in a range of shapes and patterns, often noted for their Nordic style.

Canadian Homespuns was notable not just for the beauty of its products, but for the acuity of its founder’s business practices. Bulow was praised for delegating labour and applying “big-business tactics to a home manufacture,” such as the diversification of products mentioned above. Indeed, she was credited with changing the Canadian perception of handicraft in general, proving that hand-woven materials could be elegant, versatile, and adaptable. Her attention to detail and “extraordinary sense of colour combinations” were also praised as keys to her success. Always an advocate for not just her own business but the value of hand-woven fabrics in general, Bulow explained, “[I]n home decoration, the entire colour scheme of a room can be incorporated into the curtains, drapes or upholstery. And it is no more expensive than good machine-made material. Besides, hand-woven textiles are strong and durable.”

In 1950, when the business had gained significant renown (with Bulow even referred to as “a household [name] throughout Canada” thanks to her successful tie business), the company was commissioned to create hand-loomed curtain fabric for Trans-Canada Airlines’ North Star aircraft. It produced 3,300 feet of flame-resistant wool, drawing colours from the aircraft’s interior together into a striped pattern that the airline hoped would convey a “distinctively Canadian” identity. Other corporate clients included the Canadian National and Pacific Railways and the Bank of Nova Scotia, which gave her textiles visibility across the country.

Around 1957, the company’s name was changed from Canadian Homespuns to Karen Bulow and, in 1959, it was sold to Edward and Margareta Steeves. Margareta had been a former apprentice and designer for Bulow. Ties continued to be produced and sold across Canada, though some changes were made to their textile blend, and the company’s fabrics for interiors remained popular for many years.

Furthering Bulow’s original interest in teaching hand-weaving, in 1969 the company then known as Karen Bulow Ltd. was enlisted by the Canadian government to help establish a weaving education program in Pangnirtung, a small village on Baffin Island. The community was given instruction in weaving and eventually created a local textile industry that became the largest single employer of women in the village.

In the 1970s, the Karen Bulow Ltd. headquarters were gradually moved from Montreal to Toronto, though both branches were maintained until the company’s dissolution around 1990. Karen Bulow herself had retired to Ontario when the company was sold to the Steeves, and sources say she continued weaving, turning her attention to artisan wall hangings. Bulow passed away in 1982.

“Wide-Scale Handicraft Project Planned as Aid for Returnees.” The Gazette, May 27, 1943. 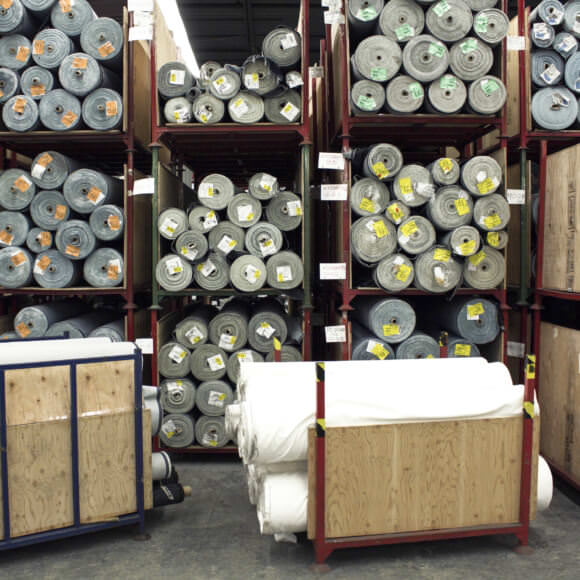